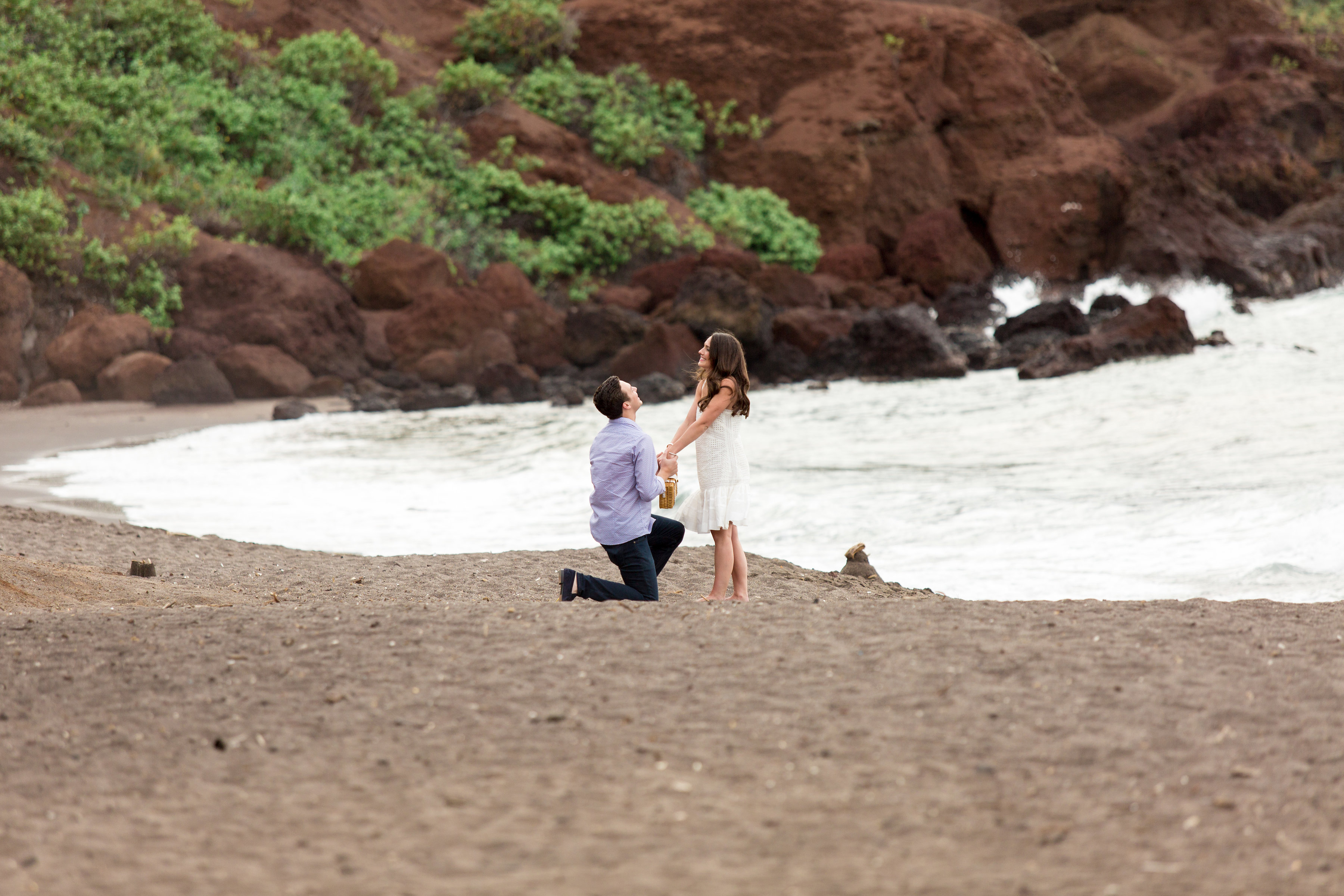 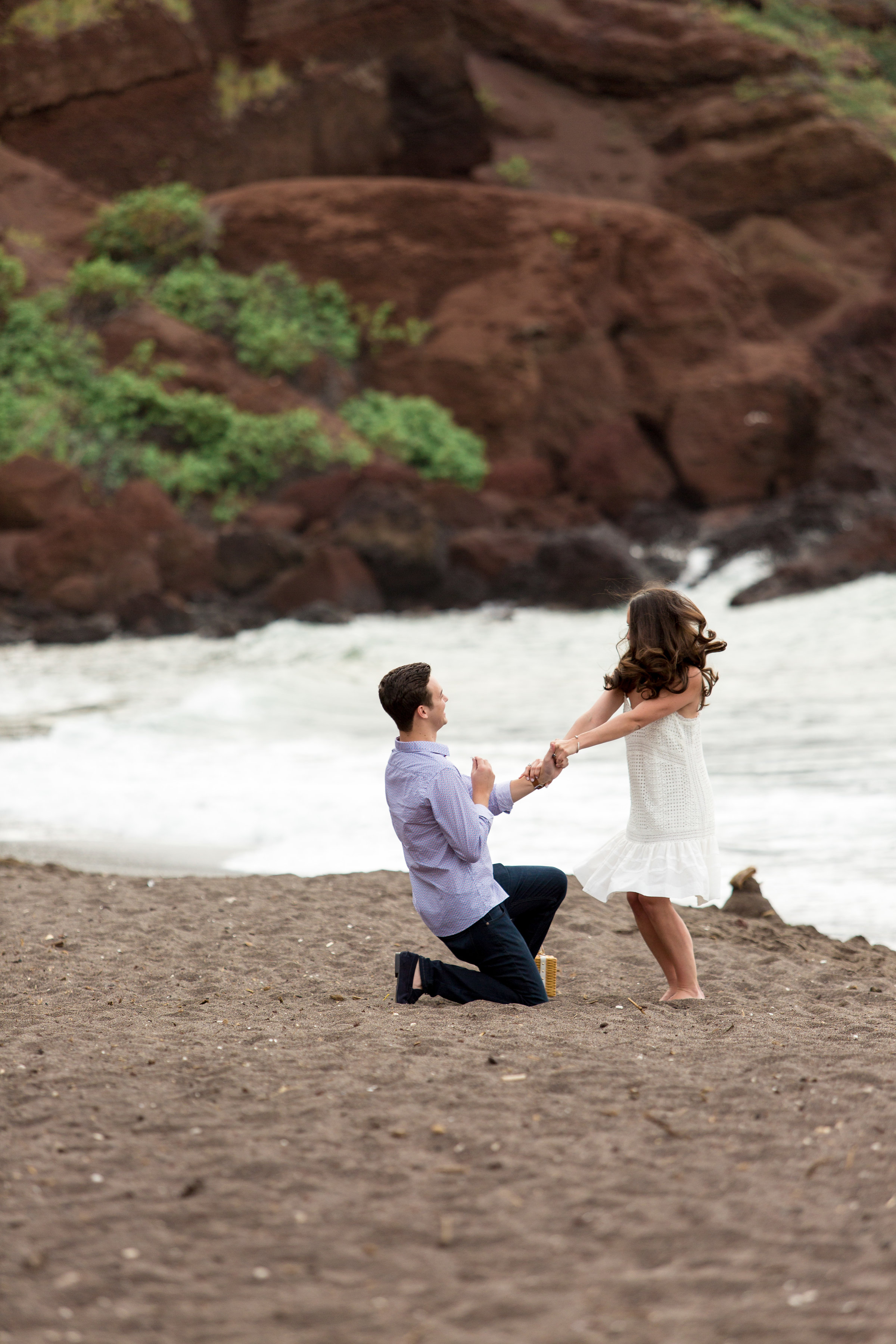 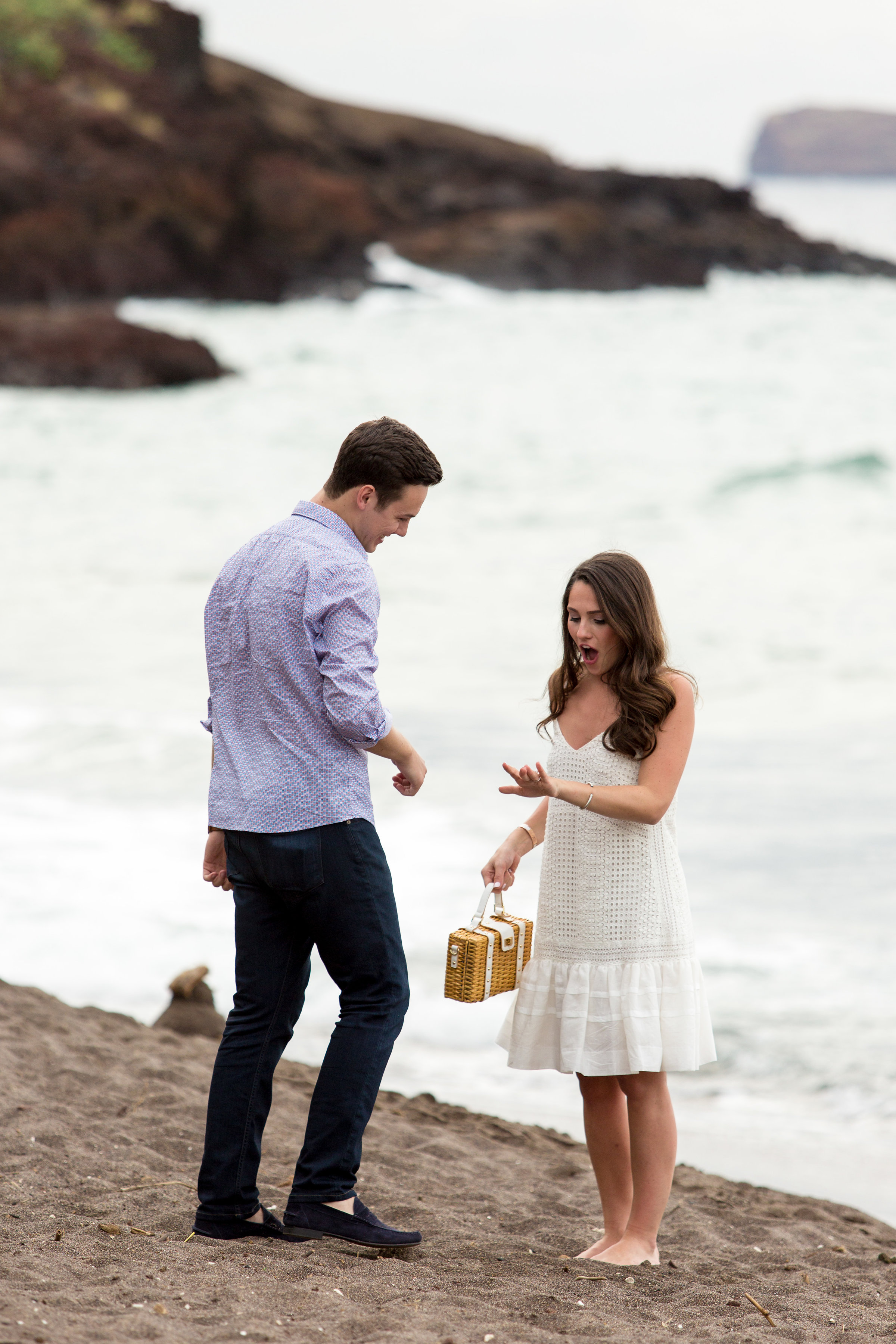 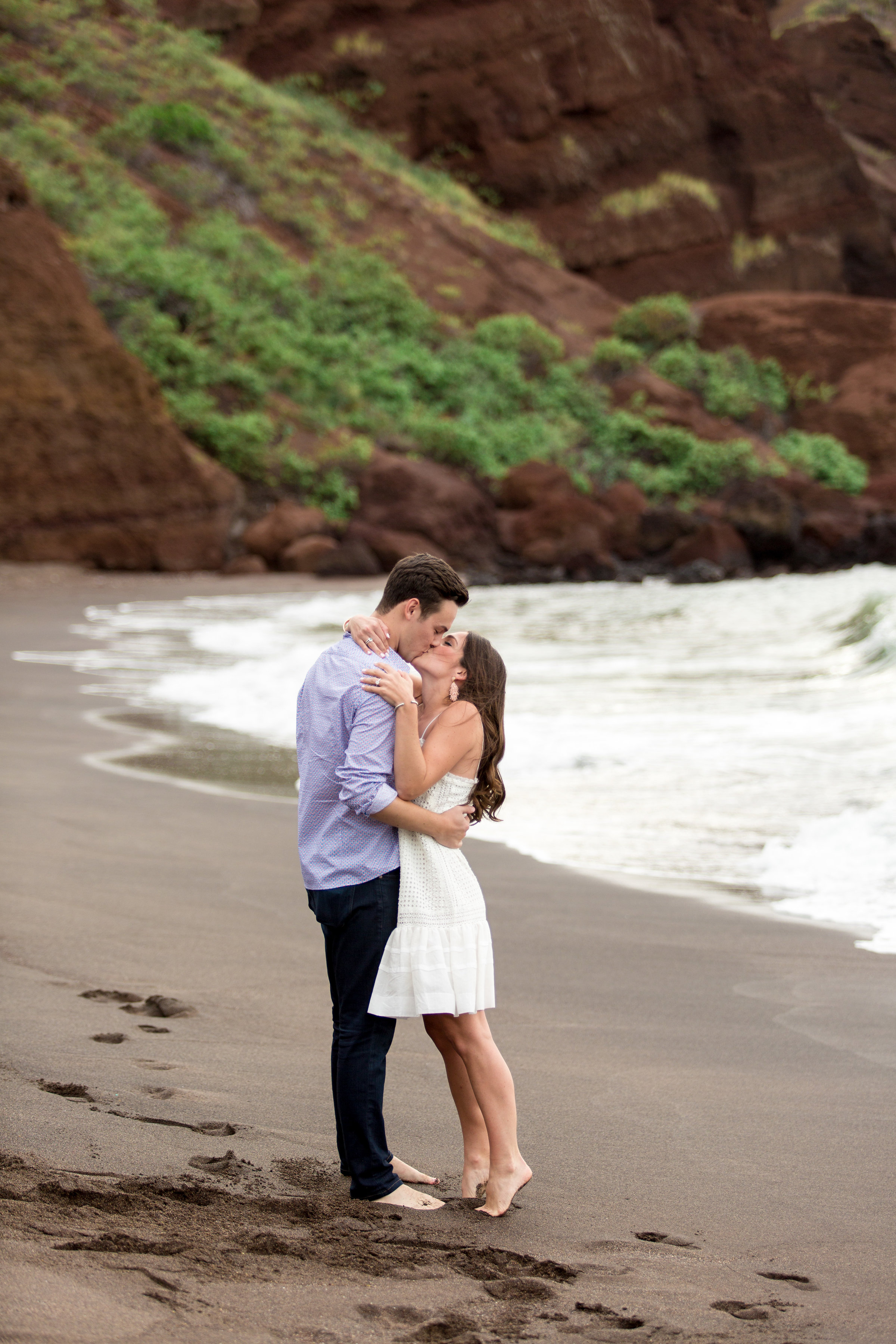 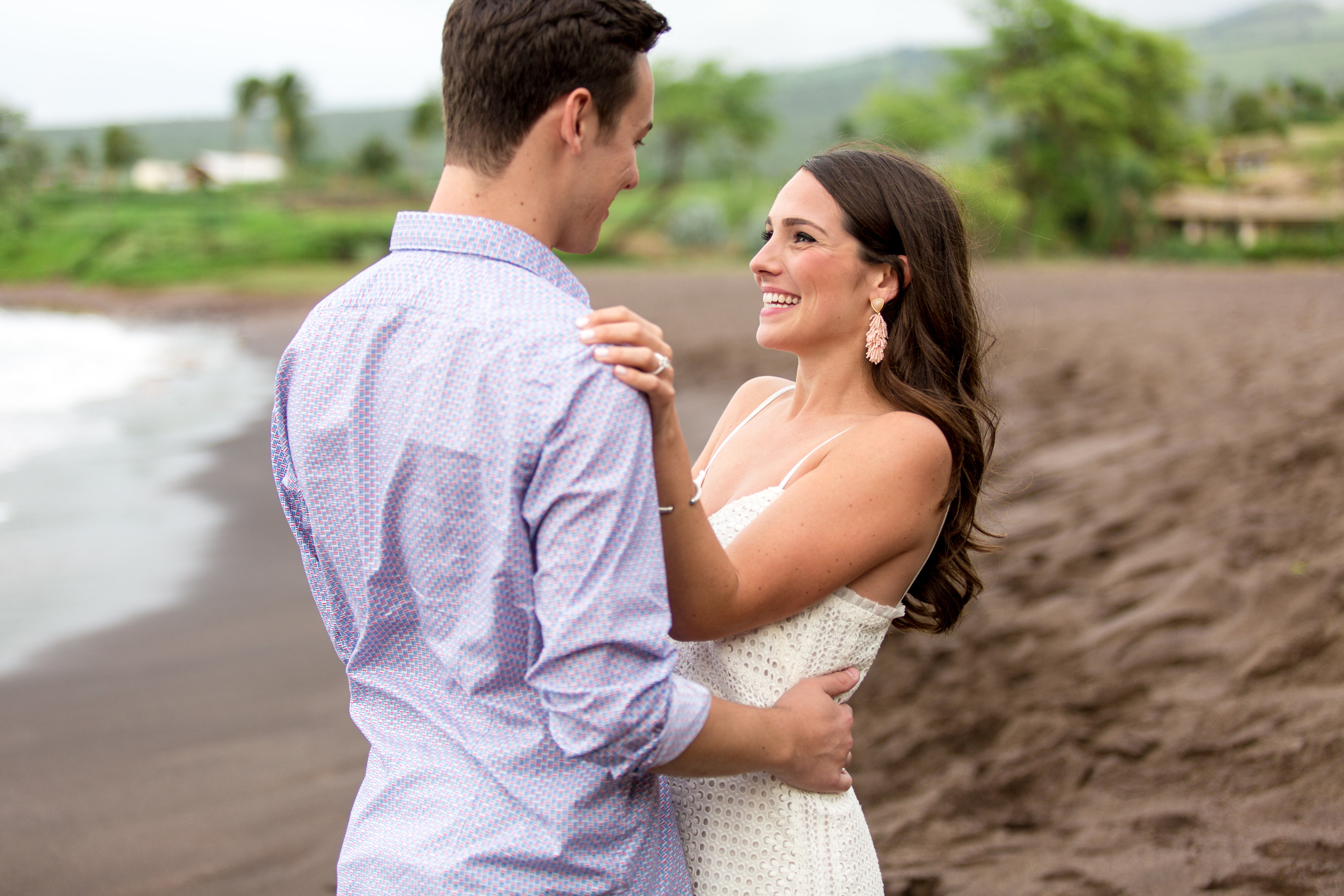 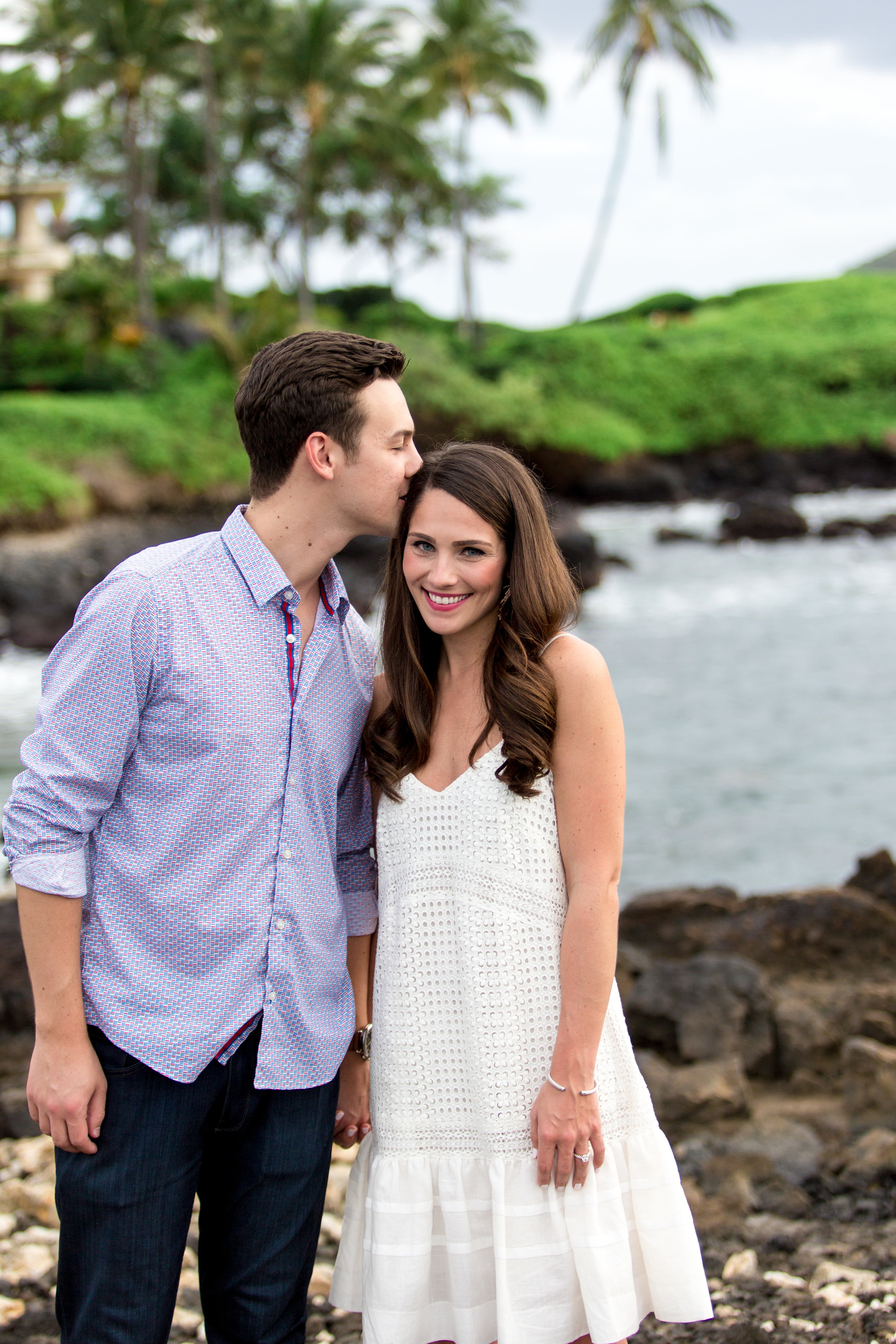 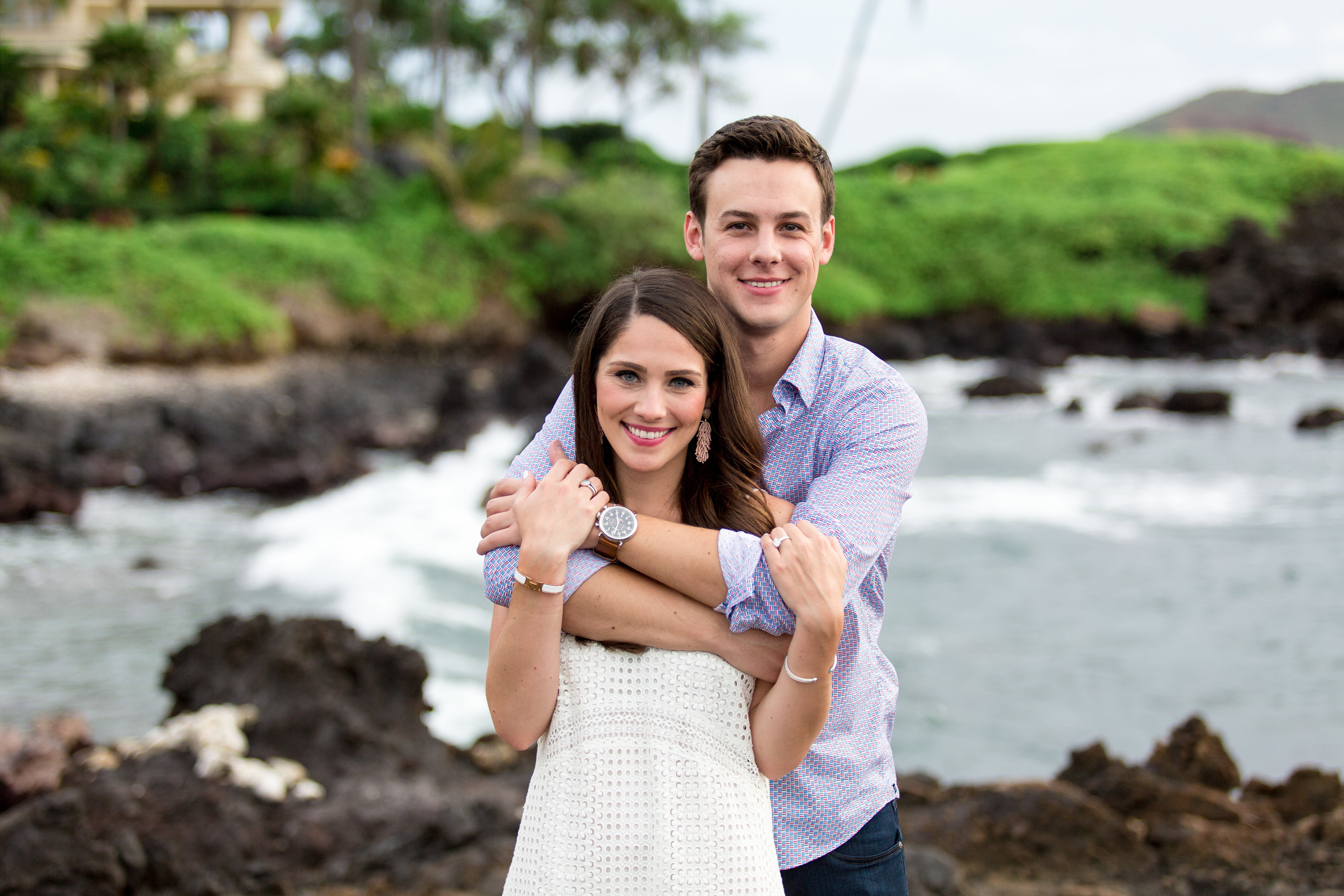 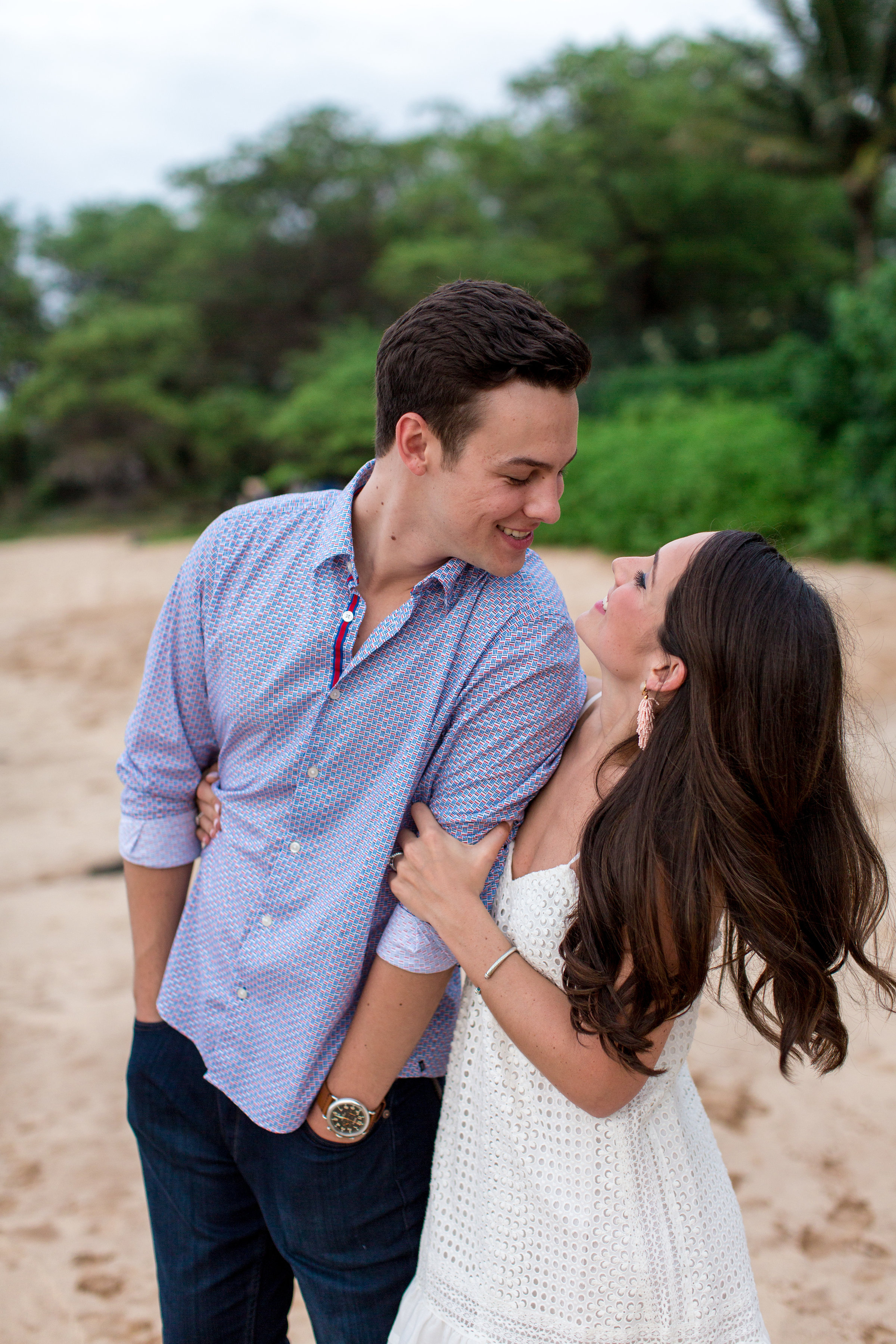 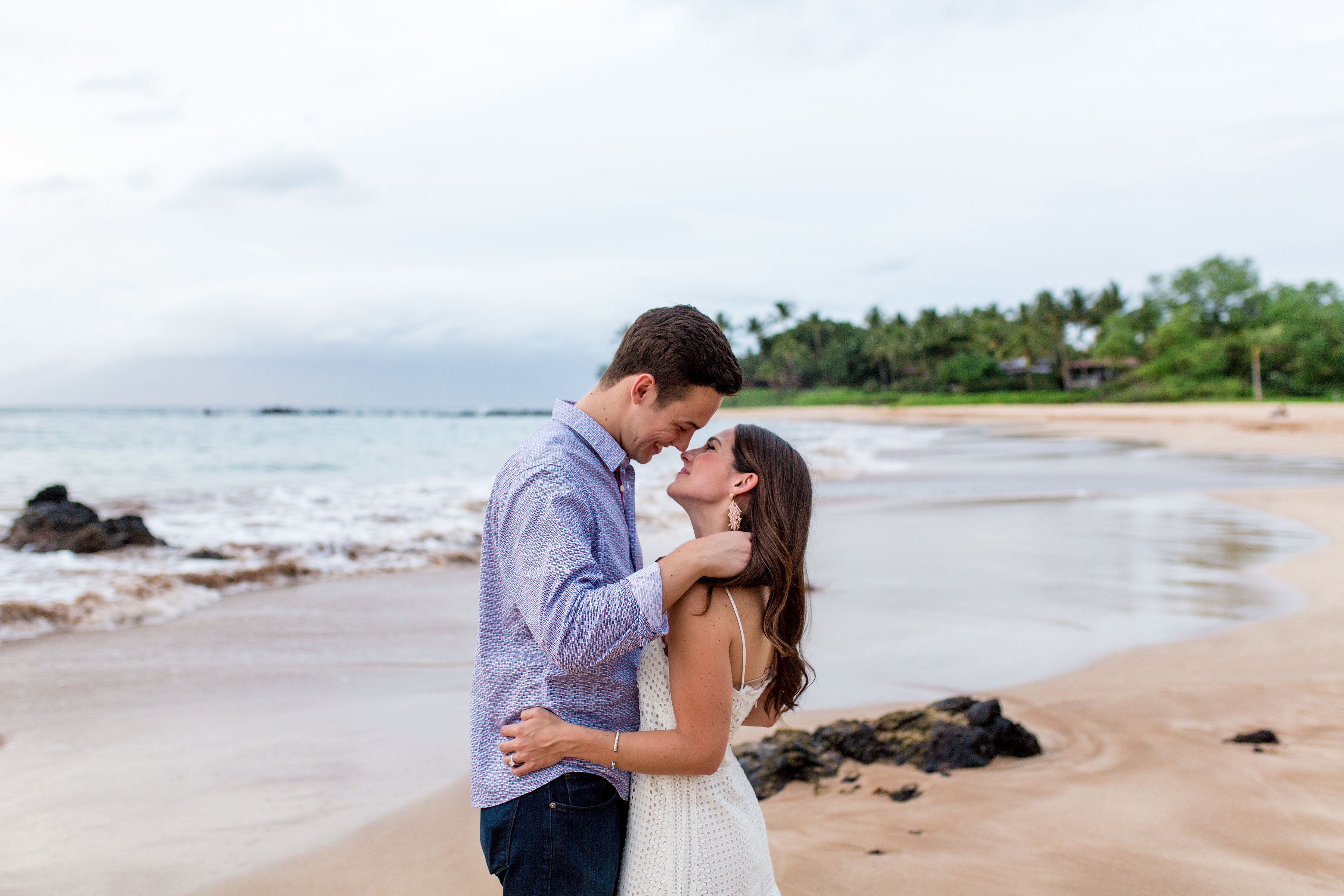 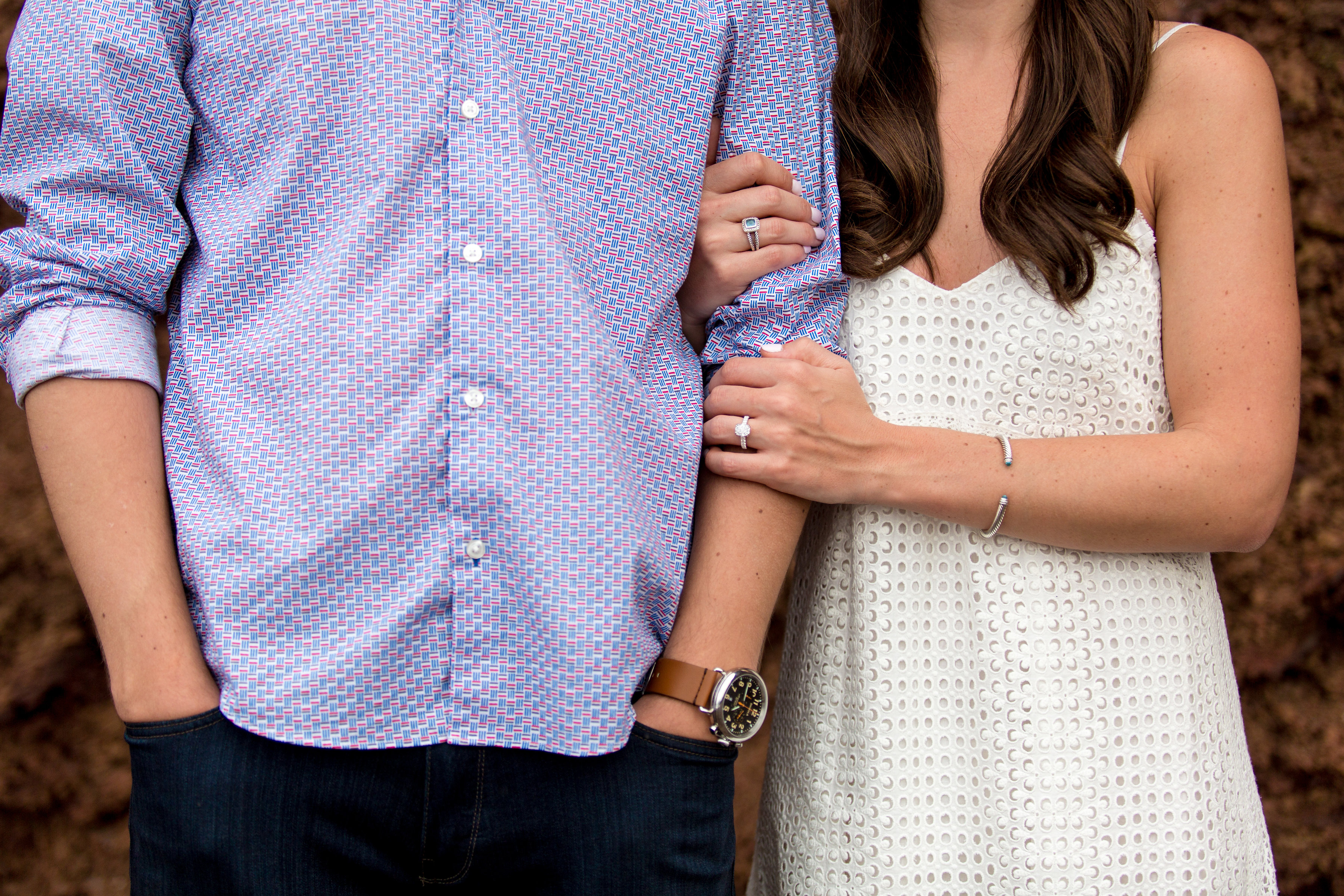 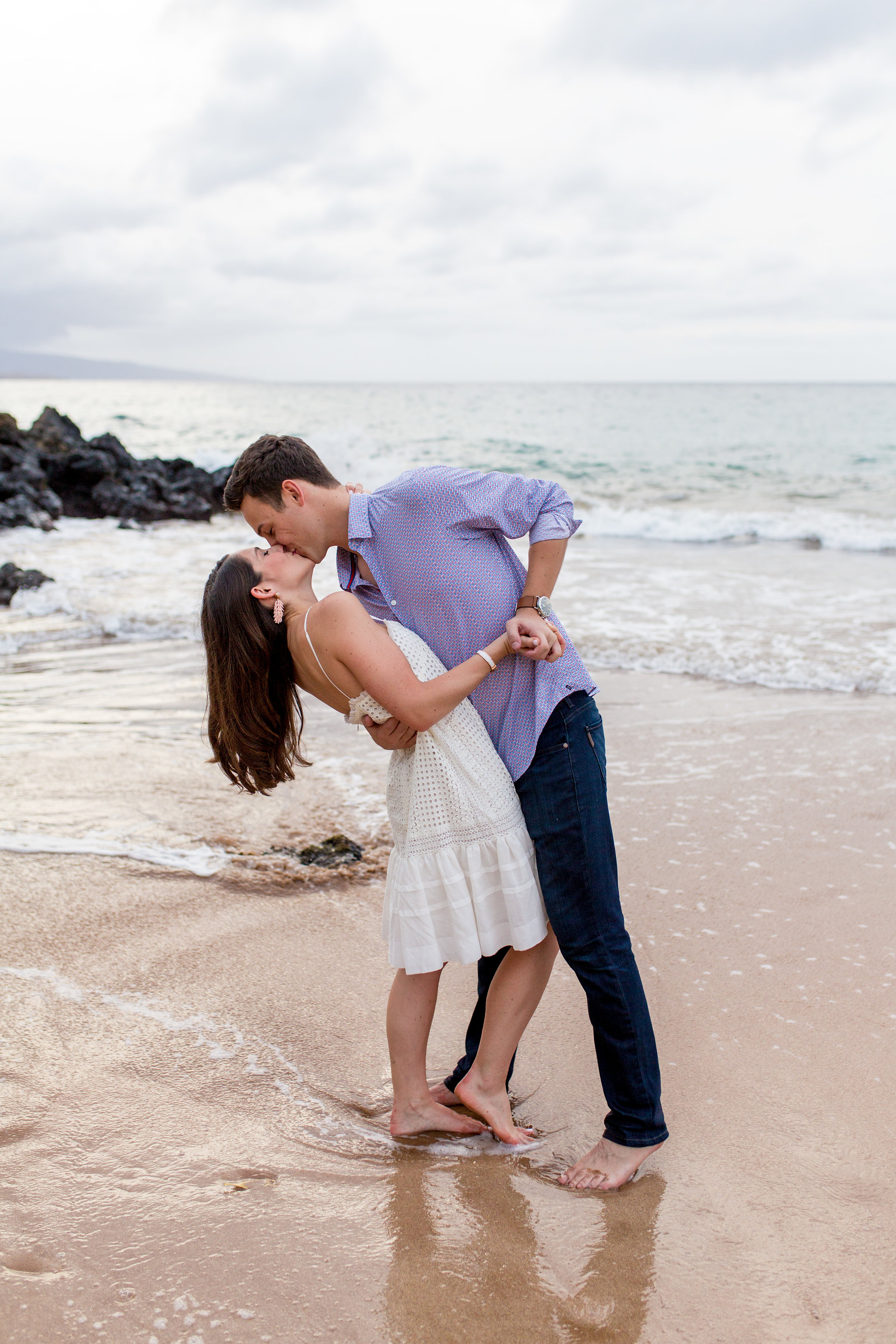 Ryan and I are exactly one year away from our Wedding day and I couldn’t be more excited that the official countdown can begin! I still can’t believe that in 365 days I will be getting ready to walk down the aisle and marry the man of my dreams! In honor of this special day I thought it was appropriate to (finally) share our engagement story and some more photos from our engagement. Since I already know this will be a long post, I’ll get to it….

We were on our way to Hawaii and I had a hunch that this might be THE trip but I didn’t want to get my hopes up especially because we didn’t have anything special planned for the week. Being the “investigator” that I am I was keeping a close eye on all of Ryan’s moves – yes I even snooped around in the safe a bit to see if there was a “special box” hiding in there. He seemed calm as could be and as we approached the third day of the trip I began to convince myself that it wasn’t going to happen.

That morning (November 27) Ryan told me he had planned a dinner and wanted to show me a secret spot he read about. Ryan’s always been one to plan little surprises like this so I was still skeptical on whether or not it was going to happen. We spent the morning snorkeling and then got ready to head over to the other side of the Island to this “secret spot”. I noticed that Ryan wasn’t holding anything and didn’t have anything in his pockets (AKA. the ring box) so I was pretty disappointed. The entire car ride I was thinking of where else he could be hiding the ring!!

When we were about 10 minutes from the secret spot, he finally told me that we were going to a beach where you could see baby dolphins at sunset (he knows me too well…) I was shockingly disappointed by this because despite the fact that I was begging him to tell me where we were going, I thought that if he was going to propose he wouldn’t give away a single element of the surprise. At this point I was convinced it wasn’t going to happen.

Eventually, we turned off onto a rugged road and approached a private beach where one other car was parked. I started to feel a little suspicious when Ryan grabbed my hand and stared charging through the sand in his brand new suede loafers. As we walked down to the shoreline looking out on the horizon for the baby dolphins, Ryan pulled me close to him, gave me a hug and kiss and got down on one knee!

I can’t remember a word he said, all I remember is feeling like the entire world around us was standing completely still. I’m pretty sure I started saying yes while jumping up and down before he even brought out the ring or officially asked me to marry him. I couldn’t have asked for a more perfect moment and despite the fact that I had a hunch it might happen I was still so surprised that the moment I had dreamed about for so many years was FINALLY happening! After Ryan proposed the secret photographer he had hired to capture the moment came out of hiding and took tons of photos of us.

As if the engagement wasn’t a big enough surprise, Ryan had also set up a dinner for us in a private tree house overlooking the ocean. We had our own personal Chef and Sommelier for the night. It was so special to be able to privately celebrate with each other and just have quite time to enjoy each other’s happiness.

Despite the fact that I haven’t shared much about our plans with anyone, we have been very busy planning and have most of the big stuff done! Pheww! I probably won’t share too many specifics before the big day but I will try to post some of my wedding planning tips over the next year or so!

Introducing The LTD Edit! 🤗 My new site and brand is live and ready for Black Friday & Holiday shopping! Head to the link in my bio to shop and check out todays blog post about the exciting new update!

A few days of fun in the sun! ☀️ Now we’re off to meet our sweet niece before heading home to the holiday madness. 💕

Working on holiday gift guides and an exciting blog update! I can’t wait to share everything I’ve been working on with you guys soon! 🤗

Also, I finally got my hands on this cozy sweater set and am obsessed! So perfect for the winter temps heading our way this week!

My daily make up routine! You can find everything I use at Sephora and it’s all currently 15% off for VIB members and 20% off for Rogue members! Everything is linked in @shop.ltk

Sunday spent at home getting ready for a busy & exciting week ahead! ☺️

This cozy $35 sweater was delivered yesterday and I’ve been living in it ever since! It comes in every color you could ever want and is such amazing quality for the cost!

Oversized sweaters and my fave leggings will be my go to as baby girl grows this winter. Just found this incredibly soft and cozy sweater and lots of others @aerie that are all currently on sale!

Shop my striped sweater and lots of other similar styles in @shop.ltk
https://liketk.it/3SIKu

Oldies but goodies. My pullover and flats are favorites from last year and they’re back in my rotation and back in stock again this Fall. 🍂🍁

Starting the week with a full ❤️ after a fun filled fall weekend with my boys. 🥰

TGIF!! 😅 The daily struggle of thinking “Today’s the day I’ll sit down and relax during nap time.“ 🙃 Consider this your reminder to take a minute for yourself this weekend! ❤️

One of my favorite sweaters is part of the @amazon prime day early access sale! It’s super cozy, great quality and comes in a bunch of other cute colors that I’ve already added to my cart! 🛒🛍️ Happy shopping!

Sharing more of my picks in the @shop.ltk app!

Calling all color lovers! 🌈 This fun, scalloped collar dress is part of the @target fall designer collection with @kikavargas_ and under $45! 🤗
https://liketk.it/3RwXt @targetstyle

Three ways to wear this bump friendly sweater dress this fall - weekend, work & date night. Which way would you wear it most?

A visit to the pumpkin patch and our porch is looking a lot more colorful & a little spookier 🍁🎃 Happy October!

Pulled out all my pumpkins this week but still searching for the perfect spot for each one! 🎃 I always seem to find room for a few cute new ones each year! ☺️

Drink if you dare 🍸☠️ My bar cart is ready for spooky season! 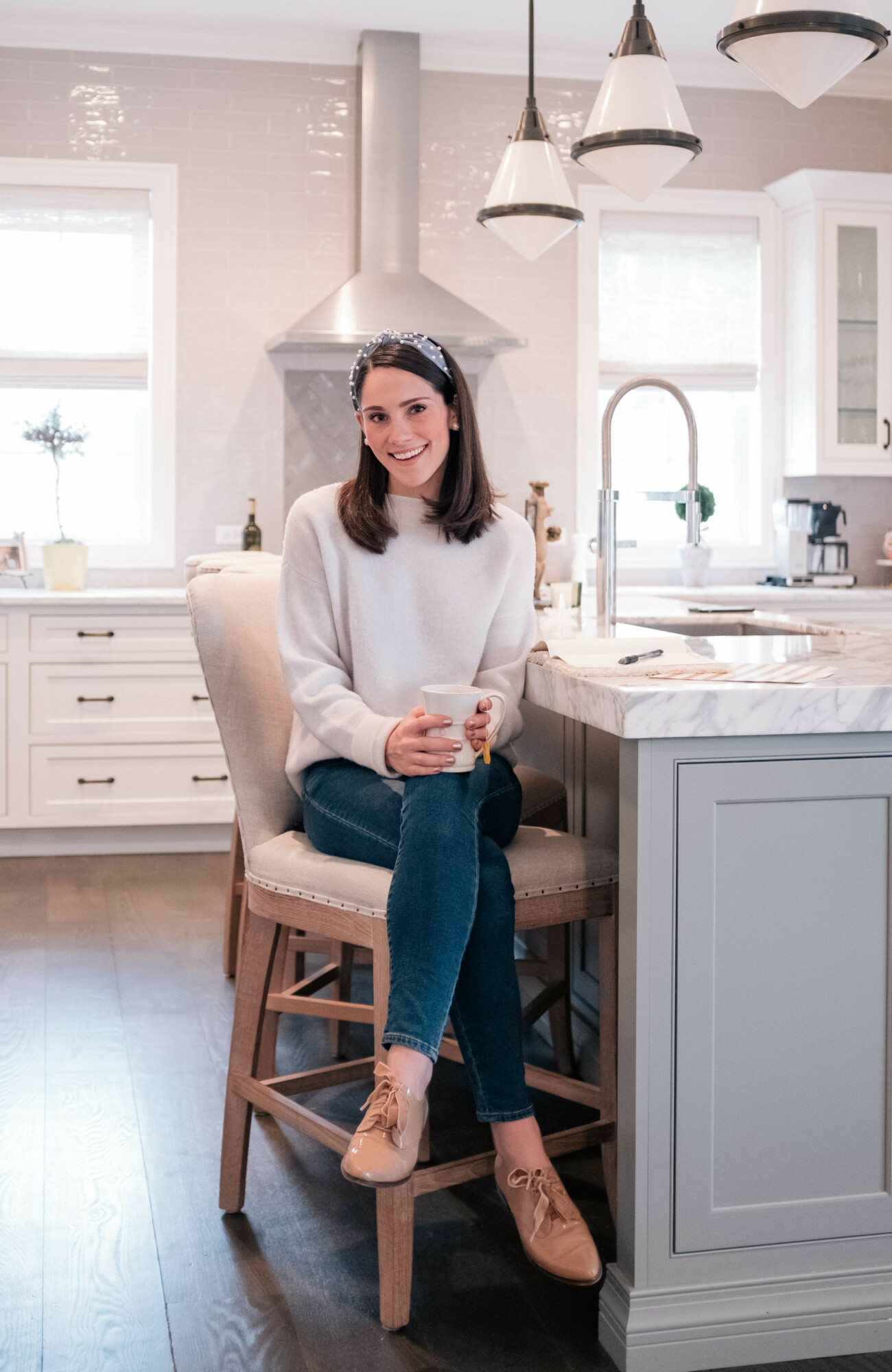